England offers some of the most beautiful walking and hiking trails in the world. From the high peaks of the much-loved Lake District to the lush landscapes of Surrey, here are 11 England’s prettiest walks…

Catbells in the Lake District

The Lake District National Park is a favorite place of romantics, poets, artists, and nature enthusiasts. The entire park is carved with a network of hiking trails including the short yet thrilling Catbells walking route. Hitting the road from the town of Keswick, you’ll climb to the top of the Catbells hill to breathlessly contemplate the views of the nearby Derwentwater and Bassenthwaite lakes along with the majestic heights running over the horizon. The 3.5-mile there-and-back route winds through the scenic woodlands of Manesty and Brandelhow Parks and crosses the River Greta. Despite some minor scrambling involved, the trail is accessible even for beginners. 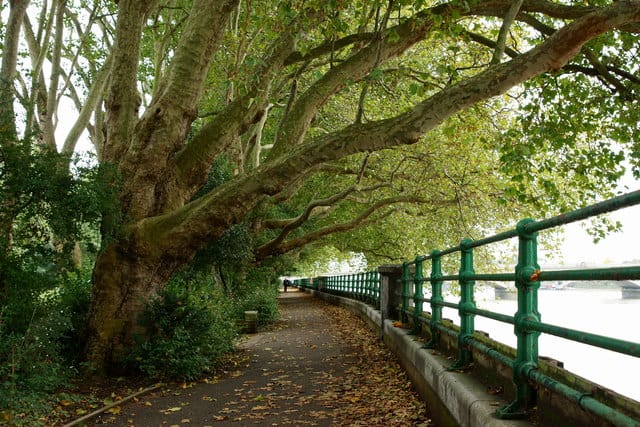 One of the most interesting – and beautiful – walks in England is easily The Thames Path National Trail which follows the most famous river in England for an eye-watering 184 miles. Starting from Kemble in Gloucestershire, it flows to the Thames Barrier at Charlton, south-east London. You’ll have to plan your trip if you want to tackle most or all of the route (the whole route takes two weeks to walk) but if you do, you’ll be rewarded with exceptional scenery including wildlife and wildflowers, pretty villages, ancient market towns and plenty of locks! 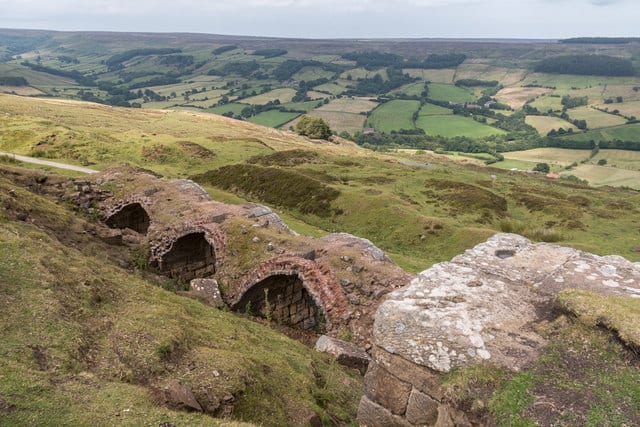 In the 19th century, life was in full swing in Rosendale. It was the North Yorkshire’s center of iron ore and coal mining bristling with burning vents of kilns and scurrying trains fanning out across the country. Now, only the ruins of old industrial buildings and an abandoned railway line recall the industrial past of these parts. Instead, the Rosendale countryside greets travelers with rolling valleys, herds of cattle roaming all over the place, impressive swamps, and a scattering of small farms. You have a chance to come in contact with Rosendale’s industrial past and enjoy its rural present en route the relaxing 7½-mile Rosendale railway Circular Walk. The trail runs along the dismantled railway lines encircling picture-perfect moors and valleys. Far and wide, you’ll come upon the crumbling masonry giants of the Victorian era. 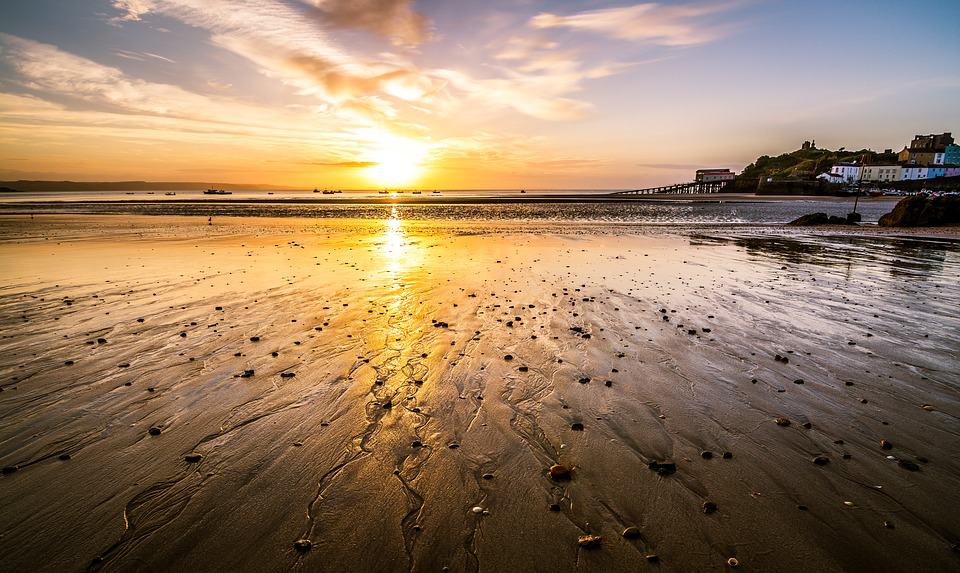 Traversing 186 miles across the south-western littoral of Wales, the Pembrokeshire Coast Path National Trail has been repeatedly recognized as the most picturesque coast of Great Britain. It encompasses virtually all kinds of marine landscapes, from steep limestone cliffs and bumpy red sandstones to volcanic capes, river mouths, and flooded glacial valleys. 58 beaches and 14 natural harbors will greet you along the way. This wild and incredibly beautiful terrain teeming with marine animals is the pride of Wales. In addition to exciting hiking routes, the Pembrokeshire Trail lures surfers, sea kayakers, and beachgoers. History buffs won’t leave empty-handed either thanks to historical monuments of the Celtic and pre-Celtic periods, ancient castles, and charming century-old towns. 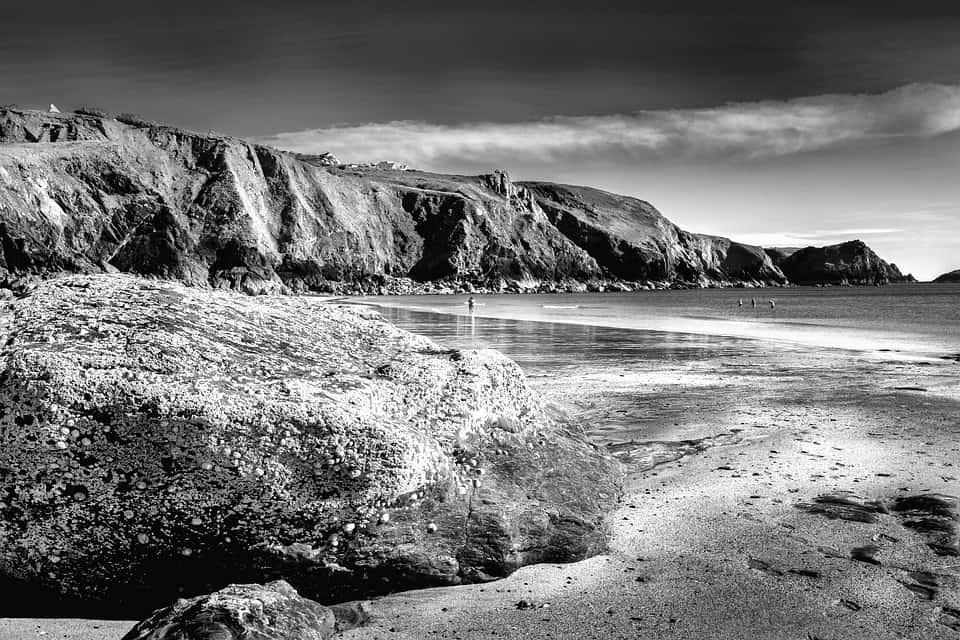 Unlike many other places in Cornwall, the Lizard Peninsula managed to avoid the impact of industrialization. Here, you can see quiet life in tiny fishing villages in England scattered across the Helford Valley,  explore countless picturesque coves, or behold the breathtaking water landscapes that inspired Daphne du Maurier to write the Frenchman’s Creek novel. However, the stunning nature is not the only attraction drawing in travelers across the entire UK. South of Helford, there is a wide wind-blown Goonhilly Downs plateau dotted with rows of wind turbines and futuristic saucers of the satellite Earth station. Wildlife lovers will take a shine to the Gweek Seal Sanctuary, a rehabilitation center for seals, sea lions, otters, and other marine inhabitants of Cornwall. Bound together by the South West Coast Path, these delightful landmarks cannot be overlooked. 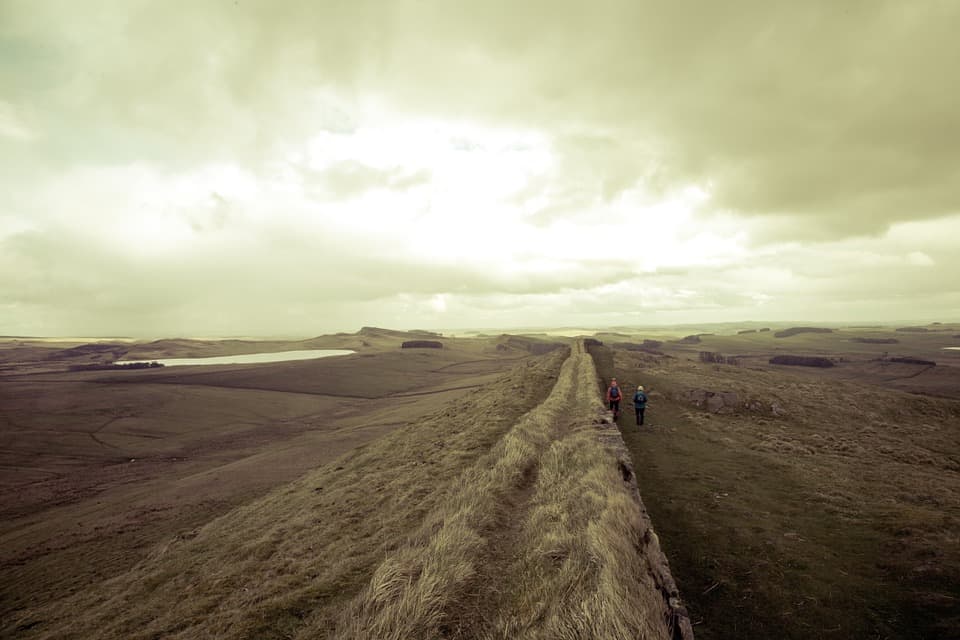 Built-in 122 BC by the order of the Roman emperor Hadrian, the 84-mile fortification is one of the most impressive engineering structures of antiquity that survived to this day. You can still feel the wild energy of these ancient stone walls designed to protect the lands of the Roman Empire from the raids of the Pictish tribes occupied the territories of modern Scotland. Today, Hadrian’s Wall spanning from Tyneside to Bowness-on-Solway is an impressive historical landmark hosting one of the most exciting National Trails in Britain. Throughout the 6-day route, you will get to see unspoiled moorlands, emerald rift valleys, and enchanting rural landscapes. You will also meet the vibrant cities of Newcastle-upon-Tyne and Carlisle, as well as monuments to bygone ages such as the Housesteads Roman Fort. 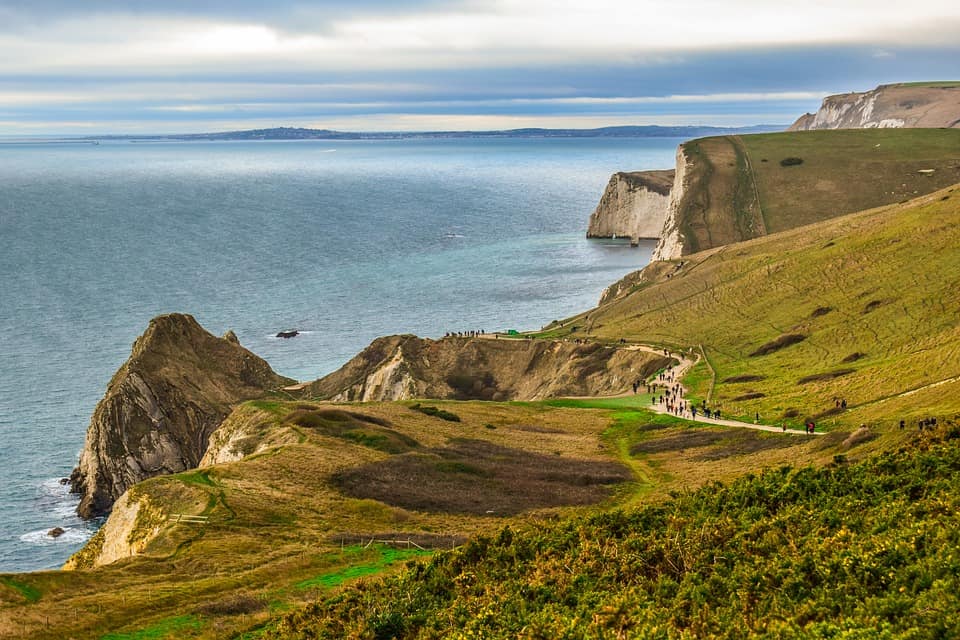 You don’t need a time machine to explore the breathtaking landscapes of the prehistoric Earth. The southern coast of England in Devon is a place that brings you 185 million years ago. Winding for 100 miles, the Jurassic Coast is a favorite destination for travelers, historians, and scholars. While hikers will be crazy about the rugged stretch of land dotted with coves, beaches, and cliffs, archaeologists continue unearthing the remains of dinosaurs and ancient creatures. The Jurassic Coast is a magical land of geological and landscape wonders including Old Harry Rocks, Chesil Beach, Golden Cap peak, Durdle Door rocky arch, thousands of prehistoric fossils, an ancient forest, and dozens of cozy villages. Due to its extraordinary beauty and historical value, The Jurassic Coast was the first natural site of Great Britain included in the UNESCO World Heritage List. 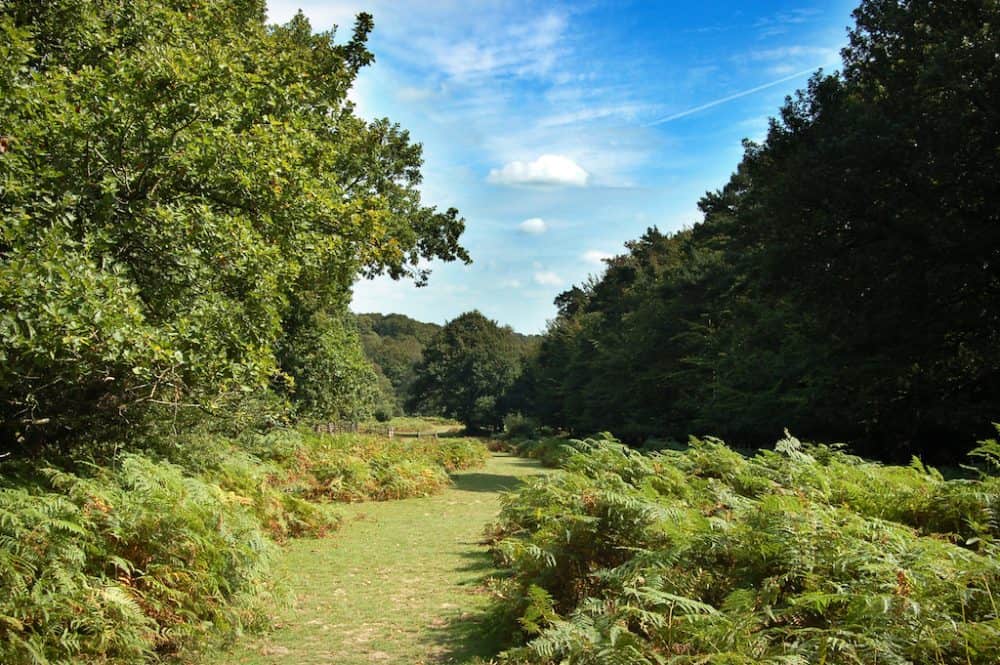 Whether you are a cyclist, horse rider, or hiker, the scenic walk in the northwest of the New Forest won’t leave you cold. The 9-mile route from Abbots Well to Fritham alternates forest and open expanses of fen moorlands with the bottomless sky overhead. Plunging into the thickets, here and there you will see traces of forest inhabitants and can fully enjoy the many-voiced singing of birds. Going out into the open space, you’ll encounter herds of cute New Forest ponies and livestock peacefully nibbling grass. The route is dog-friendly and is relatively easy. 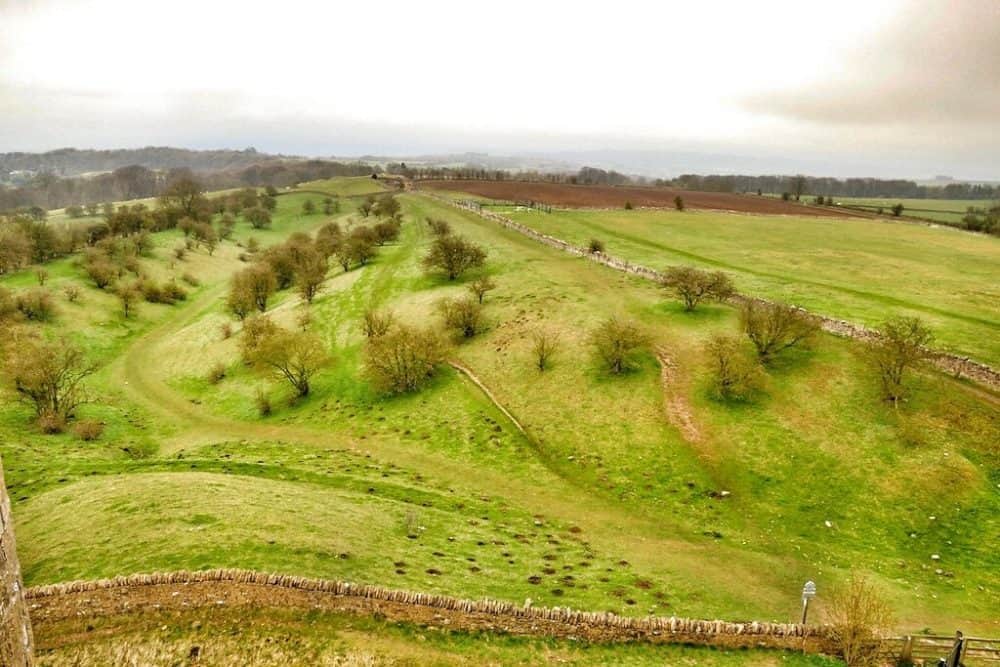 If you’re hunting down classic English landscapes with rolling green hills, dense forests, and endless fields, you can’t go wrong with Cotswold Way. Drowning in greenery, the 102 mile-long National Hiking Trail delights travelers with outstanding views of beech forests, green pastures, and pretty limestone-built villages far-flung across the Severn River Valley, England. The route starts from Bath and, meandering north along the Cotswold Edge escarpment, takes you to the captivating town of Chipping Campden. It will take you about 8-10 days to conquer the Cotswold Way but thanks to various circular walks, you can explore the route in small pieces. 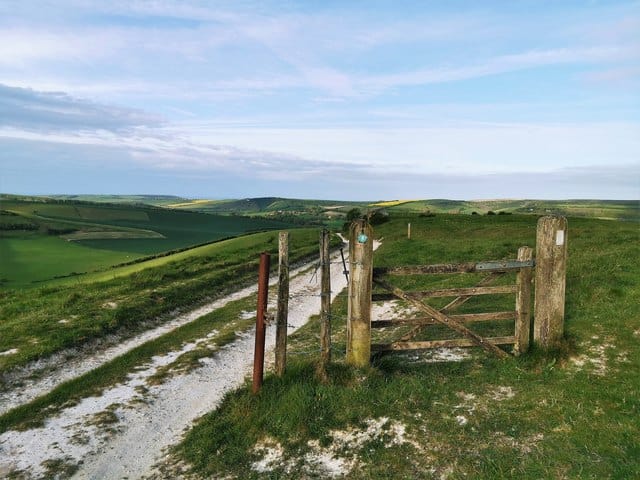 Stretching from Winchester in the west to Eastbourne in the east, the South Downs Way is the only national trail in the UK that goes through a national park from start to finish. All 100 miles of the route passes along picture-postcard chalky hills blanketed with dense vegetation, relict forests, and historic towns founded by ancient Romans and now boasting medieval architecture. The route ends with the pearl-white limestone cliffs of Beachy Head and awe-inspiring views of the English Channel. The trail featuring 13,600 feet of ascents and descents requires about 9-10 days to complete. You can also explore individual sections of the walk that can be reached by high-speed train from London. 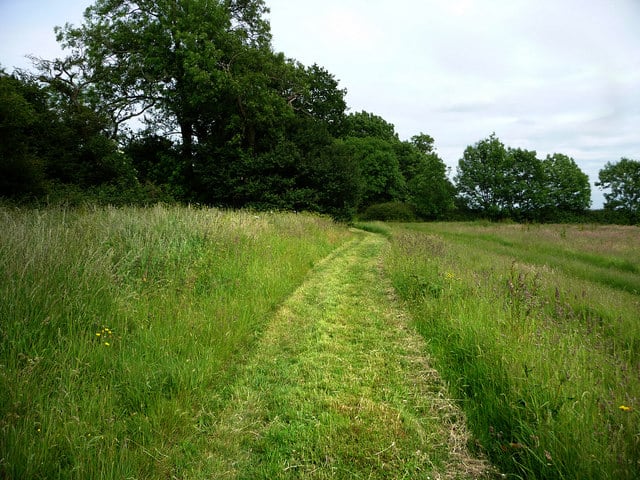 Starting at the lovely town of Farnham in Surrey, the North Downs Way footpath runs 156 miles west to the Kent Coast at Dover, capturing Canterbury along the northern split of the path and Folkestone at the southern branch. The route passing through undulating hill ridges unfolds riveting panoramic views of the chalk grasslands of the North Downs. Despite the fact that the trail winds through one of the most built-up regions of Great Britain, idyllic rural landscapes, forested hillsides, orchards, and even Sites of Special Scientific Interest will open to your eyes. Merging with the world-famous Pilgrims Way, the footpath will lead you to countless landmarks steeping in history. 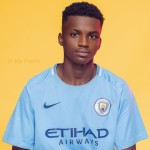 The Best Red Lipstick, And The Best Pink Lipstick